The Sacrifice Catch Team, which was established within the Gaziantep Metropolitan Municipality, caught the escaped sacrificial calf on the eve of the day and delivered it to its owner.

GAZİANTEP (İGFA) – Yunus Emre Yaycı, who lives in Sarısalkım Rural District of Şahinbey district, wanted to put the sacrificial calf he bought into the vehicle to take him to his residence.

Meanwhile, the frightened animal escaped in the hands of its owner and entered the empty land. After trying to catch the animal for a long time, Yaycı did not succeed and called the ALO 153 line and asked for support from the Sacrifice Catch Team of the Metropolitan Municipality Natural Life Defense Department.

Groups, who went to the scene after the notice, tried to catch the escaped sacrificial calf away from the settlement with the help of a lasso, while it was decided to catch the animal with a narcotic needle as it could not be restrained. , the nursing the trained team neutralized the victim using a drug injection and returned it to its owner. 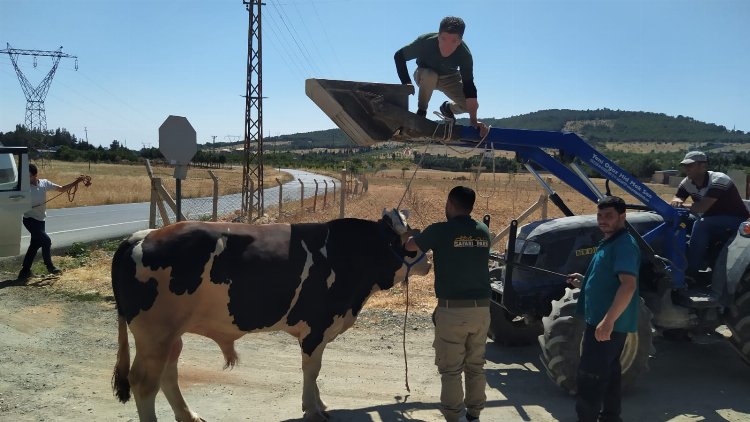 Yunus Emre Yaycı, the owner of the sacrificial calf, said that they tried to catch the animal with family relatives after the victim escaped, but when they were unsuccessful, they decided to ask for reinforcements from the municipality.

Saying that the first responding victim capture team delivered the animal to him without any damage, Yaycı said, “I would like to thank those who contributed to the service provided by the Metropolitan Municipality Sacrifice Catch Team, it would have been very difficult for us to catch the bovine calf on our own without causing any harm. As a result of the professional work, they gave me my sacrifice, I am very pleased.” he said.