Strong reaction from Minister Akar to the Greek parliament!

Minister of National Defense Hulusi Akar answered questions at the NATO Parliamentary Assembly Meeting. Minister Akar, a Greek parliamentarian, “Your occupation continues in the north of Cyprus!” He reacted harshly to the expressions in the form.

Following his speech, Minister Akar answered the questions of the parliamentarians.

Answering the questions of Lithuanian and Spanish deputies the developments in Ukraine and NATO, Minister Akar said, “Your occupation continues in the north of Cyprus!” He reacted harshly to his use of the term.

“If you say that the northern part of Cyprus is invaded, it means you want to fight from the beginning. Turkey is not an occupier in the north of Cyprus,” said Minister Akar, adding, “There were massacres and coups until 1974. The lives of the Greeks, including the Greeks, were in danger. We launched the Peace Operation in 1974. From 1974 until now, both the south and the north live in peace and tranquility. You have to see this. You must not be biased. Despite all its shortcomings, the Turks accepted the UN’s Annan Plan for analysis in 2014. The Greek side did not accept it,” he said. 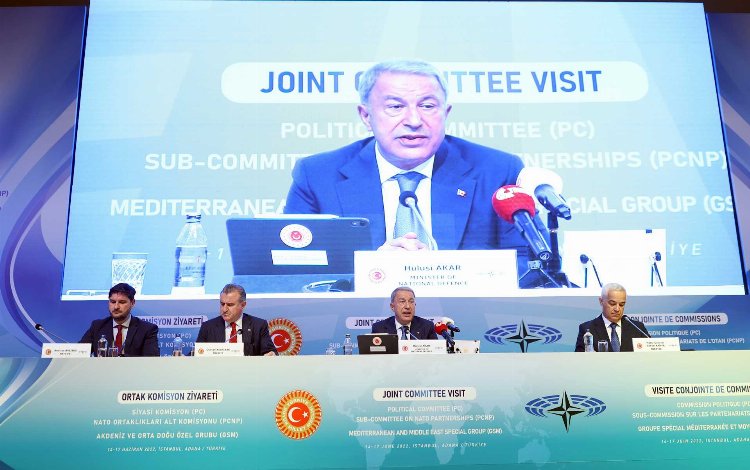 Emphasizing that the terrorist organization PKK/YPG killed 40 thousand of our people and FETO killed 251 people, Minister Akar said, “We are trying hard to save our country and our nation from the scourge of terrorism. We are committed to this bet. We have no other purpose. If you give a place to the PKK/YPG, FETO, which we strive for, harming our people, killing 40 thousand people and murdering 251 people, there is no name for alliance, this friendship is not customary. This situation also damages the alliance and is against the spirit of alliance,” he said.

After the Greek parliamentarian said, “There is no such thing,” Minister Akar said, “Don’t say no. Nobody knows the Lavrion Camp in Greece. Just like in Sweden, PKK/YPG members do everything. This has nothing to do “If terrorists are given so many opportunities, it is very normal that we do not want to be together with these people,” he said.

“The Turkish Air Force flies over the Greek islands,” said another Greek MP. Upon his words, Minister Akar said, “Greek planes came to our mainland on April 27 and violated our airport in Datça, Didim and Dalaman. You will come from the mainland of Greece to the mainland of Turkey and violate our airport, what do you expect us to do from now on? These have radar sights, we’ve also shared them with allied nations. And we paid them back on April 28,” he said.

NOT SUITABLE FOR GREEK COURTESY

Emphasizing again that the solution of the problems between Turkey and Greece can be through negotiations, Minister Akar said, “We have always and persistently mentioned that we are in favor of the solution of problems through international law, good neighborly interests and dialogue. The first of these is the Advisory Meetings, and the third is the Confidence Building Measures meetings. We care about Confidence Building Measures meetings. Because the issues have many historical, legal and political dimensions. Experts need to come to a meeting and study them in detail,” he said.

After the harsh answers of Minister Akar, one of the Greek parliamentarians said “I will not thank you”, Minister Akar said, “This is not an act of Greek courtesy!” he answered.

Many Americans oppose the race of transgender people in the female category in the matches.