ISTANBUL (IGFA) – Istanbul Metropolitan Municipality (IMM) President Ekrem İmamoğlu opened the Sevgi Soysal Library as part of ‘150 Projects in 150 Days’. Soysal’s daughters, Funda and Defne Soysal, accompanied by İmamoğlu at the opening of the library, which contains 10,200 books. Making a short speech at the opening of the library in Taksim, one of the most valuable spots in Istanbul, Funda Soysal said that she saw the “Sevgi Soysal Library” as her residence and expressed her satisfaction that her mother was named after her. He loved young people. I think that he wrote many of his works by keeping an eye on the youth in their most difficult years. It is also meaningful that a library opened in the name of a person who loves this kind of lively life and young people very much, in a place like Taksim full of chirpy young people. I won’t be able to pass without my father. He always advised to embrace the concepts of freedom and knowledge. I am very happy that my mother was taken care of”.

WHAT IS NEEDED FOR NEW VICTORIES IS IN OUR GENES

IMM leader Ekrem İmamoğlu, who is the owner of the program, started by reminding the word he said at the 30 August celebration and underlined that new victories should be achieved in the second century of the Republic. Stating that the journey of these victories is the other, İmamoğlu said, “Now, in this age, the meaning of victory for me is in knowledge, culture, art, literature, quality of life, sports, but of course, their presence in technology, science, new inventions and inventions, together with other elements that bring you to the showcase in the world, are our fundamental victories. will happen in the next century… We are a society that can achieve this. It’s in our genes. Let’s just lay the groundwork for it. Let’s just show this character. come out. In order for this to mature, let’s create environments that liberate people, bring people together with knowledge and enable them to continue their lives with their original ideas. The library is just one of those spots,” he said.

EVERY PROJECT TOUCHING PEOPLE IS GREAT

Referring to the inaccuracy of separating the projects as large and small by considering them numerically, İmamoğlu said, “Small or large projects that are defined by the dimensions measured by the sizes that some people feed in their small minds… We, on the other hand, believe that healthy steps have been taken to provide welcome to those people who enlarge and increase the quality of life of the society. We look at every job as a big project,” he said. Stating that the ‘150 Projects in 150 Days’ marathon will continue with projects created in the light of this concept, the İBB Leader said, “We will not do business to deceive anyone or to please a few people or a handful of people. We will do business to please our nation. Regardless of its district, which party it is associated with, and what political view it weighs there, we will do the works that address the universal feelings and needs that our city and our nation need. In our ‘150 Projects in 150 Days’ openings, you will see and experience all this diversity that I have just described. Of course, our walk is not limited to 150 projects. We will be a municipality that works non-stop, bringing together a few 150 days and a few 150 projects that are very valuable in front of us.”

Saying that the 5 years he has been in office will be the most successful period compared to the previous periods, İmamoğlu said, “No five years in the past will be like these five years. In these difficult days, we have seen the urgent needs of our nation and tried to bring them together with the society as soon as possible, and we have been one of the most successful companies in Istanbul, even in a period when the most difficult conditions of the economy were experienced in these difficult days. We want to live 5 years in this city. Our thesis is that this period will be the most successful 5 years of Istanbul. Our one-on-one argument is that I too shall be the world’s most democratic mayor. I have two feelings. I hope that at the end of the work, it will be a process where all of them meet with you”.

Referring to the indictment prepared by the Istanbul Chief Public Prosecutor’s Office, which was on the agenda in the last part of his speech, İmamoğlu’s speech on the issue was as follows:

“We are an institution where social aid has been registered since 2004. From this date to the pandemic process, we encountered a more demand than the number received during the pandemic process. Almost 1.5 million people in İBB – which means households – asked for contributions, asked for help, wanted support and survival… Both the exit from the pandemic, the depression caused by the deep economic crisis, unemployment, all these are growing as a huge problem in front of us. As IMM, it is not the main duty of the local administration, we did not say that we should watch it from afar. We have supported people and families in need with real campaigns. We have entered over a million households. We contributed to our people. We reached our people in need with the ‘Together We Will Succeed’ campaign. We sent our aid directly to our mukhtars and told them to distribute them too. By sending our parcels or cards to all of our nearly one thousand mukhtars, we contributed to our people in need through their hands. We continue to do so.”

“WHEN WE ARE CONCERNED OF THE POOR, WE UNDERSTAND THAT SOME OF THESE ARE STILL IN CASE OF THE CONSTRUCTION”

“For the first time, we established the Department of Headmen. We expanded what the Department of Social Services had started. We got our affiliates involved. We enabled our Istanbul Foundation to get involved. Together with a large 360-degree cooperation network, the resources of the institution or the resources offered by our citizens, we tried to run every job that the poor need and to reach out to every person in need. Naturally, while these arrangements were going on, we also contributed to different institutions, organizations and associations. This sometimes happened to fellow countryman associations. Sometimes charity associations… Sometimes there were some non-governmental organizations. We managed the process by trying to describe whether he was truly in need. But when we are in the worry of the poor, we understand that some are still in the grief of the plot. We bow to these plots. We are not human beings with the character to turn a blind eye. As we embarked on this journey, we expressed everywhere how high our ideals and hopes for the future were, and how high our hearts were and our character to never give up.”

“HOW WE CAN TURN A CALIPER WAS FAIRING”

“While our people were still in the whirlpool of poverty, people who were troubled by this should have been at the heart of the basic work, but even at that time, a ministry acted so recklessly that it even took care of our collected aid and confiscated it. They did some inappropriate things by hiding behind fabricated circulars and fabricated regulations… They got nothing. They tried to figure out what more we could do, how we could turn these processes into a conspiracy. They continued to make accusations, baseless accusations, and to use the judiciary as a political weapon in a state of disillusionment and behavior. Once again, they are in a baseless process. A minister who banged his fist on the table about a year ago as 557 terrorists has been attacking our municipality by the inspectors with his ambitions ever since. With an attack, they were surprised what to do in the process. Our door is open to well-intentioned investigators, our necks are thinner than hair. Because we manage the nation’s money, the nation’s, but we are standing firm against some bureaucrats, ministers, whatever their name is, who are unfortunately incapable of doing their job, who are trying to find something by provoking the wrong with such a guided or coercive process. We never fall, we never hold back.”

“I AM NOT AN OFFICE TAKING PHOTOS WITH IMPROPER PEOPLE”

“Today, an indictment is being put forward with an effort to associate it with a terrorist organization at the point of putting forward an indictment, making an accusation and giving a sentence to my fellow traveler. Why? With the understanding of hitting Ekrem İmamoğlu… I walk the road with confidence in my fellow travelers. I don’t have an office that takes pictures with appropriate or inappropriate people knocking on my door after I get an office. Let no one confuse me with him. My companions are those who do their work in a noble manner. Nobody should use the judiciary as a weapon. This nation naturally has an answer to this. I follow the process carefully. We stand tall in the face of the mind that put 86,000 of our employees under suspicion by saying 557 terrorists and, when nothing appears, tries to reach my fellow travelers with a terrorist nonsense through a non-governmental organization. I’m with my fellow travelers.” 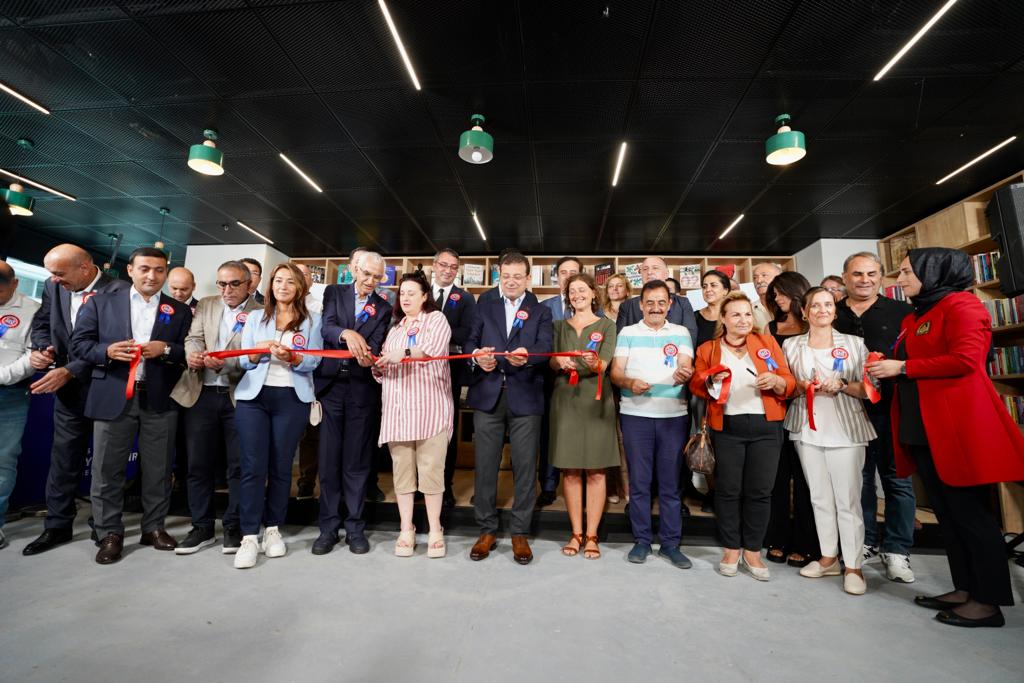 “NO ONE CAN TURN IT FROM OUR WAY”

“You guys keep threatening us. No problem. Our nation will give you what you need when the day comes. In this sense, I would like to address the respected members of our judiciary from here. There is also my personal case in it, which corners the judiciary and forces the judiciary. We get these kinds of sensations. We do not want to believe, we follow. However, we also hear about members of the judiciary who set a barrier to such intentional situations and behaviors directed at me only towards my fellow travellers. We hear respected members of the judiciary showing them the power of the judiciary as a wall. Thank you. That’s what it takes. We are rational individuals who have entrusted themselves to the rules of this country and this state, to its judiciary and to the justice system, instead of people who, unfortunately, use their office as if to threaten a person every day with their ridiculous interests playing with the values ​​of this country and this state. We are patriotic people. We are people who can do anything for our country, for our nation. We are running for our ideals. No one can turn it from our path. In this sense, we will continue to be among those who serve for the sake of the country and the nation. But I also say to those who choose this true and immoral path. Their path is too short.”