‘Noble’ thanks to steel wings

Özge Karabulut Coşan, the helicopter pilot of the General Directorate of Security, Aviation Department, and the first and only female pilot of the Andarma General Command, Lieutenant-Colonel Hülya Eker, who participated in the work on the fire that broke out in the forest area 5 days ago in the Marmaris district of Muğla, from the first day on. she was one of the attendees. Interior Minister Süleyman Soylu thanked him from his social media account.

ANKARA (IGFA) – An image was taken from the region with one of the helicopters of the General Directorate of Security, Aviation Department, and the newly burned areas were determined.

According to the news quoted on the website of the Ministry of Interior, the helicopter, which was transmitted through the portable station, directed other helicopters used in the extinguishing works to the burning areas as a result of real detections, thus speeding up the extinguishing efforts .

Özge Karabulut Coşan, the co-pilot of the helicopter that took the image, stated that she participated in the works from the first day and explained the 5-day process.

Coşan, who works at the Aviation Department of the General Directorate of Security, said, “We took the task for the transfer of scenery with the start of the forest fires. We deployed our helicopters to the Dalaman Airport Command. From the first day, we take an image in the fire response operation and transmit it to the relevant information centers and institutions. High resolution Our helicopter with camera system has electro-optical, low light, thermal modes.We can clearly view the fire response and the situation at the time of the fire in our helicopter, and deliver it to the information center and various relevant places, including Ankara, via the portable station. We can take landscapes in an area with a radius of about 100 kilometers and we can transfer these images,” he said.

Stating that as airman cops, they go to every mission with calm and discipline, “Being a woman doesn’t have much effect on this issue. After all, I’m a Policeman too. It made us very sad to see all the fire , the feverish intervention and new fires from the air, I felt terrible emotionally. I felt it,” he said.

THE FEMALE PILOT OF THE Gendarmerie ALSO MADE A MISSION

The Gendarmerie, which responded to the fire with 12 helicopters belonging to the Gendarmerie Aviation Presidency, played an important role in controlling the fire. 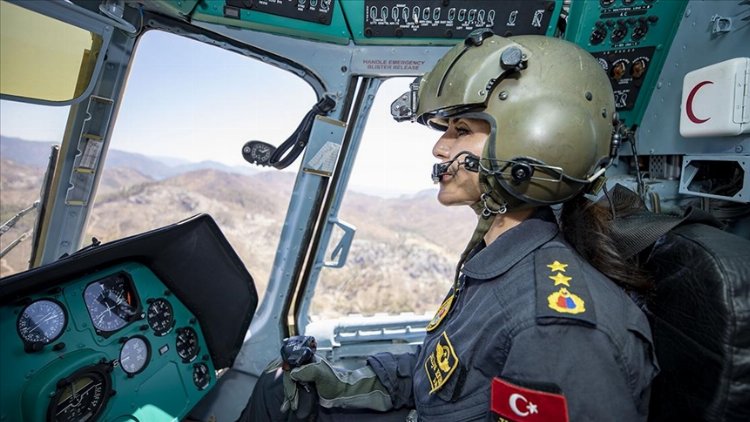 THANKS TO THE STEEL WINGS FROM MINISTER SOYLU

On the other hand, Interior Minister Süleyman Soylu thanked the female steel wings with a post he shared on his social media account.

In his post, Minister Soylu said, “Steel wings are stronger with you! Thank you so much to our female pilots, Lieutenant Colonel Hülya Eker and Pilot Commissioner Özge Karabulut Coşan, who are responsible for the steel wings of our Gendarmerie and Police, for their support in the fire extinguishing efforts.” used.

Stock market started the week with a rise

The latest situation in the markets at the beginning of the week: How much was the pound? (May 23, 2022)