Neighborhood members rolled up their sleeves in Müzeyyen Senar’s village in Keles, Bursa

The residents of Gököz District of Bursa’s Keles district, especially in the neighborhoods where daily domestic and foreign tourists are heavy, rolled up their sleeves for the repair of the mosque courtyard, the headman’s office and the fountains that have become ruined.

BURSA (IGFA) – Gököz Mahallesi of the Keles district of Bursa, the birthplace of the Diva of the Republic, Turkish Classical Music artist Müzeyyen Senar, has rolled up its sleeves due to the fact that it is frequented by local and foreign tourists, especially in summer.

Gököz Neighborhood Headman İdris Aydın said that the residents of Gököz, who took action for the maintenance of the mosque courtyard and the headman’s office, and the repair of the fountains that had become devastated, started the work together with Göközder Association Leader Hüseyin Seymen. 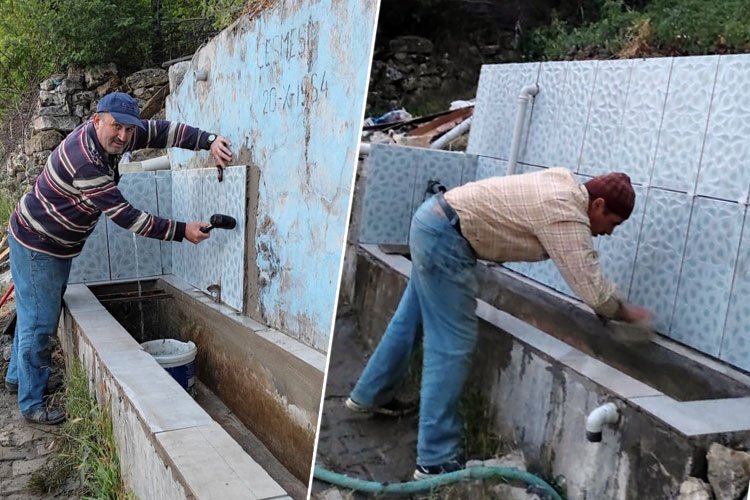 Muhtar Aydın, who explained that the plaster and paint that spilled from the damp on the outside of the central mosque, and the screed coating on the parts up to the window level, were also replaced, and the troughs of the fountains in the neighborhood were changed, and stated that the decorated front wall coverings of the mosque toilets and the toilet stones were also replaced. We gave our running water back to our fountain in the neighborhood. Gököz is a famous neighborhood both in terms of tourism and because it is the neighborhood where our famous artist Müzeyyen Senar, the doyen of Turkish Art Music, was born. Local and foreign tourists always come and visit. We are making renovations to make our neighborhood more organized. We continue our efforts. We would like to thank Keles Municipality Leader Mehmet Keskin and his group, philanthropists, who supported us, “he said.

Muhtar Aydın also pointed out that the Müzeyyen Senar Museum and guest house should definitely be built for Gököz, and stated that the necessary applications were made to Bursa Metropolitan Municipality and Keles Municipality regarding the issue, and said, “I hope this great service will be done as soon as possible.”

Altun: The professional formation of this job is valuable

Food and power will be on the agenda at Davos