The guests of the International Bursa Festival, held for the 60th time this year, were the master of fantasy music Selami Şahin and the powerful voice of pop music, Burcu Güneş.

BURSA (IGFA) – Two famous Turkish musicians, Selami Şahin and Burcu Güneş, were the masters at the Bursa Festival, which was organized by Bursa Culture, Art and Tourism Foundation (BKSTV) on behalf of Bursa Metropolitan Municipality and under the main sponsorship of the Shooting Companies Cluster with the support of the Ministry of Culture and Tourism. crossing occurred.

Before the concert, event sponsor Oyak Renault Corporate Interests Manager Selim Akbaş and BKSTV General Secretary Fehim Ferik presented the festival special plaque to the famous artists. Expressing that he is pleased to be in Bursa, master artist Selami Şahin stated that he was about to be born again every time he stepped on the stage, and that it was a different pride to take the stage in a 60-year-old festival . 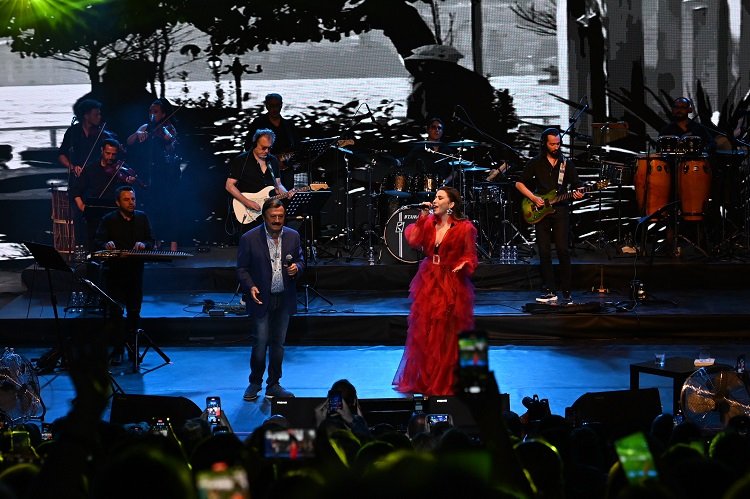 Burcu Güneş, who took the stage with her legendary music ‘Ay Şahit’ in the concert held at Kültürpark Open Air Theater, gave the people of Bursa an unforgettable evening with her stage performance as well as the music she sang.

Thanking Bursa Metropolitan Municipality and Leader Alinur Aktaş, who brought him together with his fans from Bursa, Güneş sang the popular music “We Stole Love from Angels” with the audience. Accompanied by applause by the music lovers who filled the Open Air Theater, the famous performer left the stage to the beloved voice of fantasy music, master artist Selami Şahin, after the music of “Dead End”.

An unforgettable evening with a magnificent duet

Selami Şahin, whom everyone from 7 to 70 does not drop their music, his fans with his legendary segment “I’m in Trouble with You”. She sang the music of “Getting Used to Be Stronger Than Loving” and “I Loved a Single Lady” in a duet with Burcu Güneş. The duo gave an unforgettable evening to their Bursa fans with their perfect duet. Continuing his concert solo after the duet, Selami Şahin sang many popular songs such as “Do n’t Go, I Need You” and “The Sweet Trouble of My Head” with his fans. Selami Şahin, who ended the famous artist’s excellent concert with the music of “Peace be upon you”, received a standing ovation from the audience for a long time.

Kremlin: EU candidacy of Ukraine and Moldova should not cause problems for Russia