Manufacturing branch has been losing momentum for two months

Istanbul Chamber of Industry (ISO) Turkey Manufacturing PMI (Purchasing Managers Index) survey results for April 2022 have been announced. According to the survey results, in which all numbers measured above the threshold value of 50.0 indicate an improvement in the branch, the headline PMI, which was 49.4 in March, was recorded as 49.2 with a slight decrease in April, indicating that the manufacturing branch lost momentum for the second month in a row. Although it was more measured in April compared to the previous month, the slowdown trend reached the fifth month. Insufficient demand, price-side pressures and the war in Ukraine came to the fore as factors that led to a decrease in production.

The ongoing slowdown in new orders pointed to fragile demand. Firms stated that they had difficulty in getting new orders due to the increase in prices. Total new orders fell for the seventh month in a row, while new export orders slowed for the first time since January.

Cost pressures remained strong in April. However, input price inflation decreased for the fourth month in a row and was recorded at the lowest level since September last year. According to survey participants, the depreciation of the Turkish lira and the war in Ukraine increased the cost burdens, while the prices of oil, natural gas and shipping increased. As a result, manufacturers have obviously had to raise the prices of the final artifacts.

While there were widespread difficulties in accessing the raw material, the delivery times of the suppliers were extended. Although the increase in speech was at a strong level, it was the lowest rate of the last seven months. Difficulties in procurement of equipment, rising costs and fragile demand were influential in the decrease in stocks of inputs and latest works, as well as purchasing activities in April.

The increase in employment for the 23rd consecutive month in order to expand the operational capacities of companies stood out as the relatively positive side of the survey. Employment growth was moderate, but at a slightly higher pace compared to March.

“Due to the high price pressures and the ongoing disruptions in the supply chains, manufacturers in Turkey Strong operating conditions continued. With the war in Ukraine added to these problems, exports slowed down for the first time in the last three months. However, both cost pressures and supply delays were recorded at their lowest since September last year, giving hope that conditions may become more favorable for growth over the remainder of the second quarter.” 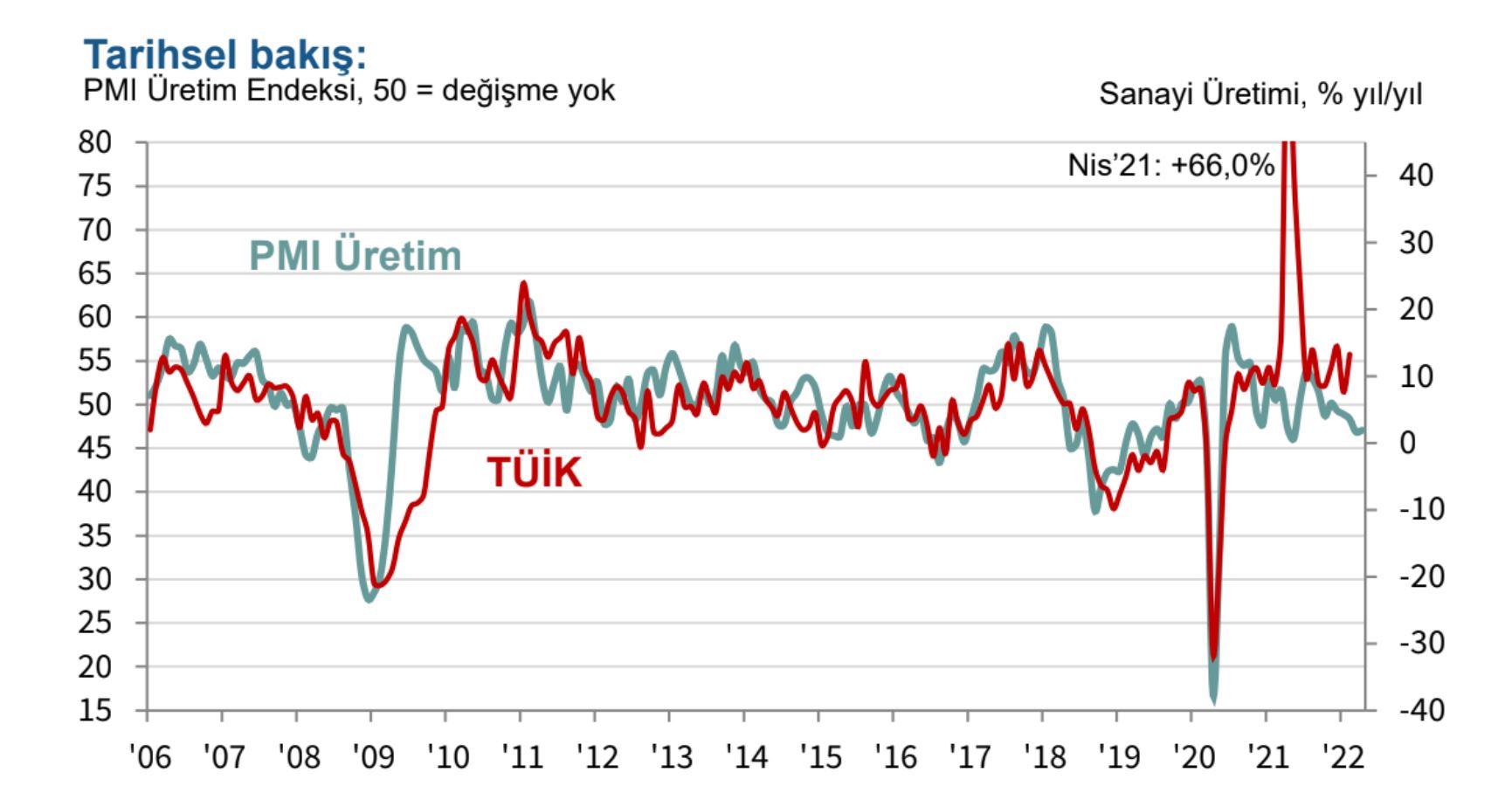 Istanbul Chamber of Industry Turkey Sectoral PMI report, despite the severe market conditions in the sector manufacturing, in the first month of the second quarter He pointed out that some indicators are improving. In addition to the weakening signs seen in inflationary pressures, the extension in the delivery times of suppliers in some branches left its place to a horizontal course. Increasing employment in the majority of segments remained one of the most positive aspects of the survey.

Only four of the 10 parts surveyed in April increased production. However, this number has reached its highest level since November last year. While production recovered in the wood and paper works and electrical and electronic works division, the strongest growth was in clothing and leather goods. Production of land and sea vehicles also continued to increase in April. The sharpest slowdown was experienced in non-metallic mineral artifacts.

While new orders lost momentum in many of the 10 segments followed, the most obvious decrease was experienced in machinery and metal works. New orders from the electrical and electronic goods division rebounded strongly and growth was recorded at the highest rate since June 2020.

In April, supply chains showed signs of improvement. While the trend of increasing delivery times in some departments left its place to a horizontal course, in others it increased more moderately compared to March. Much more finite delays were observed in the branches of wood and paper works and electrical and electronic works compared to the previous month.

In a similar form, inflationary pressures generally eased at the beginning of the second quarter. While the increase in input costs slowed down in seven sections, the inflation in the last item prices decreased in the same number of sections. The fastest rise in both indicators was measured in non-metallic mineral artifacts.

The growth of input purchases in clothing and leather goods again resulted in the strongest increase in the division’s input stocks since January 2016, when the survey began. Pre-production inventories increased in only three branches. But that number has risen to the highest level since September last year.