A critical stage has been reached in the Black Sea gas, Turkey’s largest natural gas discovery. Speaking at the first pipe launching and welding ceremony, President Erdoğan said that in the first quarter of 2023, they will transfer 10 million cubic meters of natural gas to be produced in the first phase per day to our national transmission system.

Expressing that they are working hard for the Black Sea gas, President Erdoğan said that after Fatih’s discovery, the Yavuz and Legal drilling ships were also transferred to the Black Sea, and that the bottom and top completion operations of the drilling wells drilled by Fatih were carried out by these ships.

Stating that the construction of the natural gas plant, the foundation of which was laid last year, continues rapidly, Erdoğan said, “Our Yavuz drilling ship is installing wellhead valves and in-hole smart valve systems that will measure the gas flow in the drilled wells. Today, we launch the first pipes by saying ‘Bismillah’ and then make our first source. We will hit the first source on the deep sea side,” he said.

Stating that 10 million cubic meters of natural gas produced in the first phase will be transferred to national transmission systems in the first quarter of https://youtu.be/daAglMyA6LA2023, Erdoğan said, “We will also increase the natural gas carrying capacity on land. We will also increase our natural gas carrying capacity on land. Sakarya Gas Field hope in 2026. We aim to increase our daily gas production capacity to 40 million cubic meters with 40 wells to be drilled in the field ,” he said.

Stating that they will diversify their supply sources in this middle, Erdoğan said, “We are determined not to leave a stone unturned. We have become one of the few countries in the world with a drilling fleet. A while ago, we strengthened our fleet even more with this fourth ship. As of the first quarter of 2023, natural gas started to be used in households. The spiritual threshold will be exceeded,” he said.

THE NAME OF THE FOURTH DRILL SHIP ABDÜLHAMİD HAN

President Erdoğan announced that they have chosen the name of our fourth drilling ship as Abdülhamid Han, in the name of Sultan Abdülhamid, who stood out in his period with his drilling works.

“We will continue our efforts in a very directional manner until we make Turkey a country that has completely resolved the issue of power supply security,” said Erdogan, adding, “It should not be forgotten that it is important that we make such a historical discovery with domestic resources as well as the extent of the Black Sea gas.” 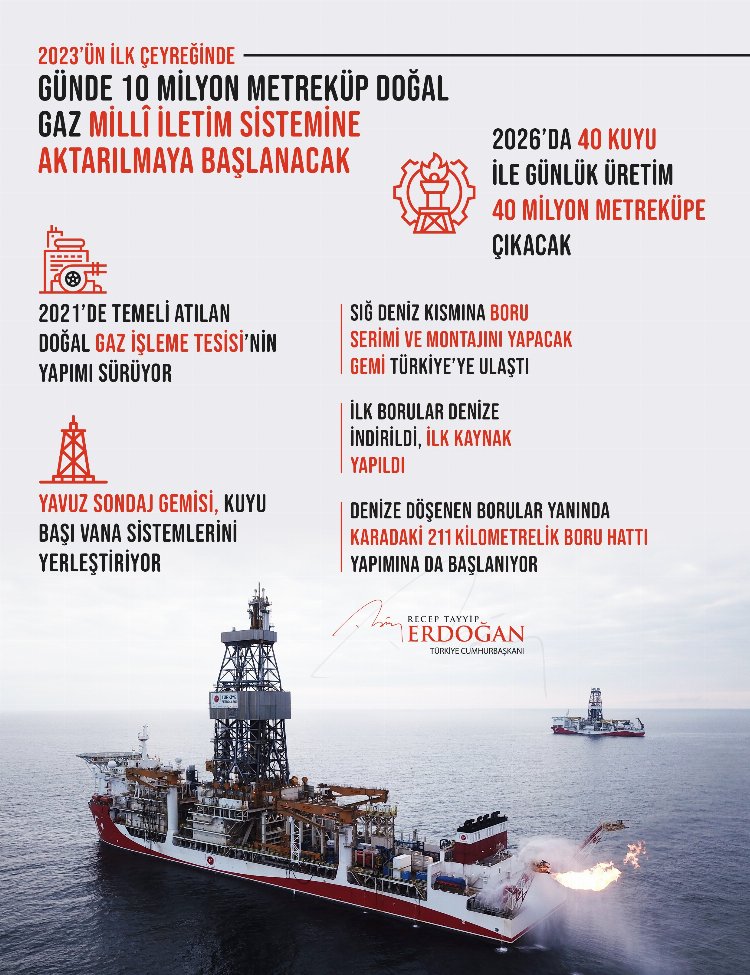 Luhansk Governor: There were 16 attacks during the night in the Donbas region