Press briefing for the 7th “International Tourism Cinema Festival”, hosted by Gaziantep Metropolitan Municipality, was held on 25 December at the Heroism Panorama and Museum.

GAZIANTEP (IGFA) – The “International Tourism Cinemas Festival”, which is of great value in terms of promoting Gaziantep’s cultural and historical richness to local and foreign directors and making the region a source of inspiration for new cinemas, will be held in Gazi city on June 14-18.

In the festival, which 450 cinemas from 35 countries applied, 25 cinemas selected by the expert committee will be screened and an award ceremony will be held on Friday, June 17th at the Zeugma Mosaic Museum.

In this context, the works of tourism actors who take part in tourism will be evaluated in 8 categories and 25 awards will be found. The works that are entitled to receive awards will be presented to the audience before the Traveling Cinema Days program. 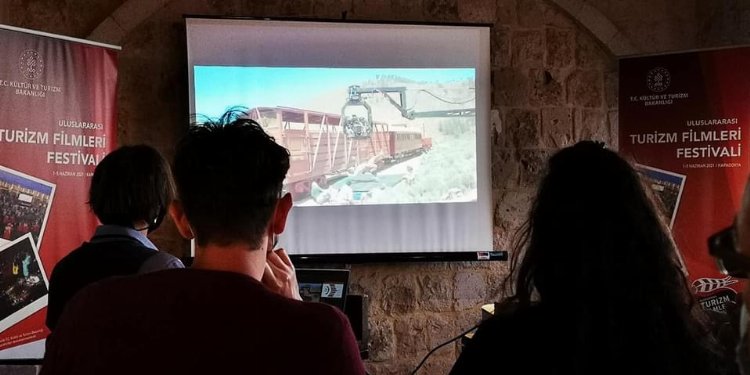 At the launch before the festival, Gaziantep Metropolitan Municipality Deputy Leader Fazilet Güzelbey stated that they attach great importance to the festival and said that there is a great civilization implicit in every corner of Gaziantep and that they want to increase their awareness by telling them to the visitors

Organized with the contributions of the Ministry of Culture and Tourism, the opening of this giant arrangement will be held on Tuesday, June 14, at the Botanical Garden with the “Gez Sen Turkey Tourism Photographs Exhibition”. On Wednesday, June 15, the Hammam Museum will be visited for the Şamsırak Fragrance Workshop and then the Emine Göğüş Culinary Museum. Afterwards, a ‘Photo Safari’ event will be held at 16.00 for Kozluca Kasteli-Almacı Pazarı-Zincirli Bedesten, Bakırcılar Bazaar-Customs Inn. At 20:00, the music group Manga will take the stage at Şenlik Park and offer a pleasant evening to the famous citizens of Gazi with their popular music.

As part of the festival program, an opening conference will be held on Thursday, June 16, at 11:00, at the Heroism Panorama and Museum on 25 December.

On Thursday, June 17, the activity will continue with a photo-safari event to be held at Beyefendi Mahallesi-Atatürk Memorial Museum-Game and Toy Museum-Turkish Archeology Cultural Heritage Institute-Kurtulus Mosque. At the end of the day, the cinemas presented to the delegation will be priced in 8 categories, and 25 awards will be given to prominent names after voting.

Warning for rising air temperature in the USA: It will affect 100 million people