Thanks to the recycling carried out by İnegöl Municipality in 90 thousand 616 households in Bursa, 2 thousand 72 tons of packaging waste was collected in the first 5 months of 2022, and 13 thousand 743 trees were saved with this number.

BURSA (IGFA) – Within the scope of the Personal Garbage Container application, which Inegol Municipality completed at the end of 2021 in Bursa, recycling bins were distributed to 90,616 households. It has been announced that 2 thousand 72 tons of packaging waste was collected in the first 5 months of 2022, with the aim of separating the recycling at the source, and 13 thousand 743 trees were saved with this number.

İnegöl Municipality has put its signature under exemplary works in this field with the radical decisions taken by Leader Alper Taban on cleanliness and recycling and the practices he has implemented.

Mayor Alper Taban, who made a statement regarding the recycling and cleaning works, reminded that the untimely garbage in the city creates significant problems.

Stating that the untimely garbage either becomes a pile at one point or is dispersed by stray animals and causes pollution in pieces, Lider Taban said, “For a cleaner and more sensitive environment in the face of such image pollution, two wheels with plastic covers in front of the doors of the neighborhood and street in our district are protected against heat and abrasion. We switched to a new garbage collection system by placing solid containers. After testing the system by making trials in pilot areas, we implemented the application in all of our 21 central neighborhoods in 2020-2021. By the end of 2021, our distribution of garbage containers and recycling bins in all our neighborhoods has been completed. Our groups in 2 years; 17 thousand 228 units of 120 liters, 3 thousand 418 units of 240 liters and 970 units of 770 liters, in total 21 thousand 616 personal garbage containers were distributed. Recycling bins with containers were distributed to 90,616 households for one-on-one on-site sorting.”

WHAT HAS THE RECYCLING APPLICATION GAINED IN 5 MONTHS?

Leader Taban, who mentioned that with the new system, the Inegol Municipality collects the recycling wastes in the residences in bags once a week for each neighborhood and leaves empty bags equal to the size of the recycling bags taken from the residences. He said that information studies are carried out on the point of reducing the waste and, in case of formation, separating it at the source and recycling it. 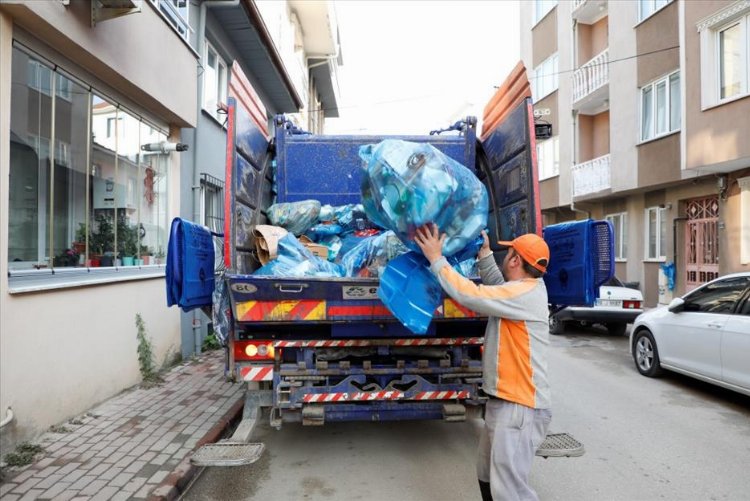 While aiming to increase the recycling collection rate up to 100 percent with the studies, Lider Taban noted that the monthly average of 300 tons of recycling wastes has reached the level of 500 tons at the point we have reached today. Tons of packaging waste was collected. When we looked at what this collected waste brought us, we saw that we achieved significant gains in terms of vital values, aside from the material aspect of the business. What are these: 13 thousand 743 trees were saved, 161, 581 kilograms of greenhouse gas emissions were prevented, 4 million 783 thousand We saw that 556 Kwh of power was saved, 2934 m3 of space was saved in the storage areas and 4054 barrels of oil was saved. In fact, the value of the work done has become clearer to us with this table,” he said.