Asbestos ship moved to the judiciary!

İZMİR (İGFA) – The dismantling permit given by the Ministry of Environment, Urbanization and Climate Change to the Brazilian Navy’s asbestos-containing Nae Sao Paulo giant aircraft carrier in Aliağa has been taken to the judiciary.

In the petition underlining the negative effects of heavy metals such as asbestos, mineral oils, arsenic, lead, chromium, copper, zinc, mercury, nickel and cadmium, and radioactive pollution on the ship, on the health of the society and the environment, the petition said, “Taking into account the magnitude of the danger to the right to life and the irreversibility of the process, It should be decided to stay the execution of the process without taking the defense of the management and to complete the processes related to the basis of the case later.

In the press statement in front of the İzmir Regional Courthouse, made with the participation of citizens, professional chambers, unions, bar associations and non-governmental organizations before the lawsuit application, İzmir Metropolitan Municipality Leader Tunç Soyer said, “We will send it as it came”.

Emphasizing the sensitivity of the environment, İzmir Metropolitan Municipality Leader Tunç Soyer stated that he is proud to always protect İzmir together and said, “We call it a death ship, we call it a toxic ship, but there is a need for correction. It is not an incoming ship. It is a cargo that has completely lost its feature of being a ship. He said: “Poison, garbage cargo… Thousands of tons of garbage, poison. First of all, we need to understand this.”

“I am speaking as the Izmir Metropolitan Municipality Leader. Until my last breath, I will work hard to protect Izmir’s tree, sea and Aliaga,” said Leader Soyer, and said, “We will always send that ship back as it came from here “

İzmir Bar Association Leader Özkan Yücel stated that they witnessed an element that Turkey yearned for and said, “We started a civil disobedience movement from İzmir. This invitation was about Turkey. Today, representatives of professional organizations and union leaders representing all of Turkey are here “They share the same invitation, the same demand here. We are determined to narrow the streets to them on the one hand and the courts on the other. We are trying every possible way,” he said. 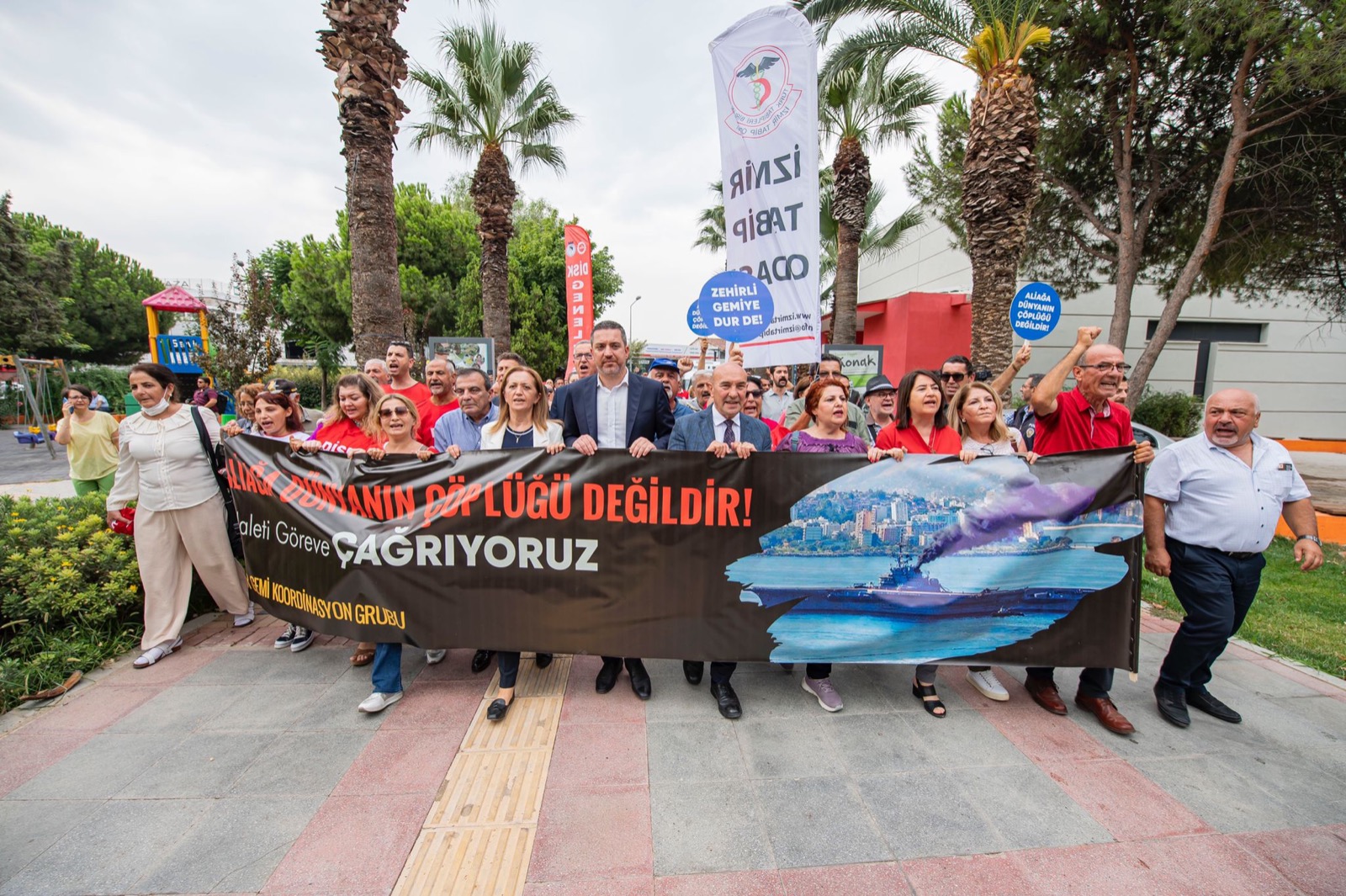 “WE WATCHED THIS CINEMA AGAIN”

TMMOB Leader Emin Koramaz, who said that they are side by side with the people of Izmir to protect life, said, “Today, we are again in front of the court against an environmental disaster and an application that threatsens public health. We are here to protect Aliaga. We stand with you with the people of Izmir to protect our lives. Since the first agreement was made for the dismantling of this ship, we made a series of statements as the people of Izmir, environmental organizations and professional organizations. However, the ministry, which is the biggest representative of this issue in the eyes of the public, ignored the reports we prepared on this issue and turned its ear only to the company that it had agreed for dismantling. The ministry says that we are following the process meticulously. They say that this dismantling will comply with international regulations. However, despite our repeated requests, they do not share any of them with us or with the public. There are important arguments that that warship contains a high rate of radioactive that it used in nuclear tests, and that it contains 1500 tons of waste materials, including 600 tons of asbestos. But the ministry turns its ear to these and trusts the company’s statements. These statements do not reflect reality. We watched this movie again and again,” he said.

“WE ARE AGAINST 9 GRAMS OF ASBESTE”

Emphasizing the effects of the asbestos-laden ship on human health, Nursel Şahin, a member of the Central Committee of the Turkish Medical Association, pointed out that the word was said from a ship that was camped with uranium and where nuclear tests were carried out , and said, “The shipbreaking company does not care, just like the government does. Always together. We believe we will stop this ship,” he snapped.

Erinç Sağkan, the leader of the Union of Turkish Bar Associations, stated that women in the first place strive to protect the nature of this country and said, “We are faced with one of the biggest betrayals made to this country. Despite the precautionary decision , a ship tried to enter the country, despite the very negative elements for the health of all people, for the sake of rent. “We see that this is being tried to be realized. We will not be a party to this crime. We will continue the effort until that ship emerges from these waters,” he said.

SOGEP support of 10.5 million liras to the South Aegean