KOCAELİ (IGFA) – Under the guidance of national trainers, the ordinary general council of Kağıtspor Club, which trains those who are interested in sports in all age groups as professional sportsmen and prepares them for the Olympic, World, European and Turkish Championships, took place at SEKASEM. At the general meeting, Dr. Kagitspor Association Club President again. Ali Yesildal was elected. Yeşildal assumed the presidency mission for the third time in the general committee, where the new administrative committee and control council member elections were held.

Yeşildal, who thanked Kocaeli Metropolitan Municipality Leader Tahir Büyükakın and made a statement after the general council, said that Kağıtspor, which was restructured in 2004 with the establishment of Kocaeli Metropolitan Municipality, increased the number of branches from 7 to 35 with its prestige today, and 22,436 licensed licensees, almost all of whom were trained in Kocaeli infrastructure. He noted that he reached the number of athletes. Ali Yeşildal also said that they have 184 active national sportsmen, and that they have filled their museums with trophies and medals by making more than 3,000 degrees in the Olympic, World, European and Turkish Championships from past to present.

Ali Yeşildal, who was elected as the leader of Kağıtspor in the new era, said that as the whole Kağıtspor family, they will strive to realize the goals and objectives mentioned by Kocaeli Metropolitan Municipality Leader Tahir Büyükakın in every platform to serve our future generations. Yeşildal said, “In accordance with the Sports City Kocaeli vision, we will always ensure the development of amateur sports and sportsmen together in cooperation with our schools, universities, sports schools, and neighborhood sports clubs. We are actively involved in the structuring efforts for Kocaeli to become an athlete training center. In this context, classical sports, cet sports, nature sports, sailing etc. in the new era. We will increase our branch diversity in different target groups by turning to different categories with water sports.” 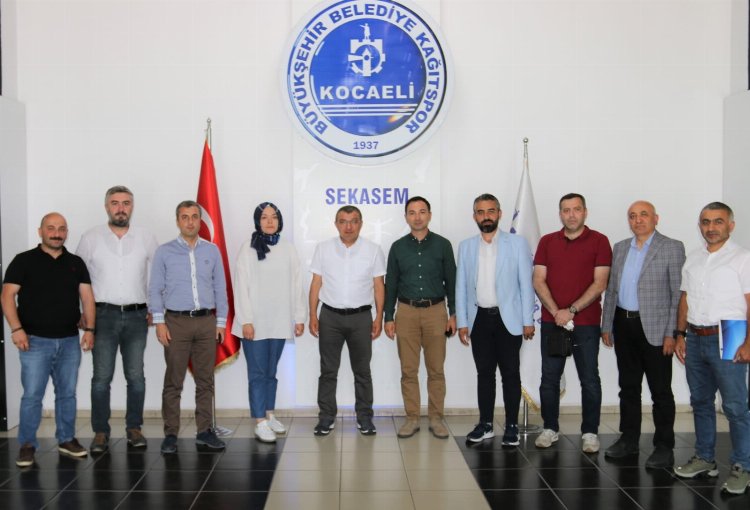 OUR SUPPLEMENTS TO TEAM SPORTS WILL CONTINUE

Yeşildal noted that the support of basketball and volleyball groups in squad sports will continue to increase, and that the competition and excitement experienced in national sports matches are now experienced in our sports halls with the Kagitspor crest. Yeşildal, who stated that they are working to train Olympic-oriented sportsmen by encouraging the increase in the number of licensed sportsmen, said, “In this context, we continue talent screening activities in the company of our Athlete Training Centers and expert teams throughout Kocaeli in order to identify our talents from a young age and to direct them to real branches according to their dexterity and abilities.” he used the term.

Kagitspor Club Leader Ali Yesildal said, “We have put our management model and experience at the Kagitspor SEKASEM Sportsmen Training Center into service for GEBZESEM, which was opened in Gebze. In this way, we will try to do our best by making the sports potential in our district more suitable,” he said. Stating that the families of sportsmen are aware of their hopes and sacrifices, along with the athletes in the successes achieved so far, Yeşildal thanked the trainers, club employees, the current administration and former managers who have contributed to this day, and all sports fans from Kocaeli who have not left Kagitspor alone.

At the meeting, the members of the management committee and the control committee delegates were elected. As a result of the general council, the main list of the Kocaeli Metropolitan Municipality Kağıtspor Club Association Board of Directors was determined as follows:

EU fails to reach agreement on ban on Russian oil

Objection to carbon at the border