AFAD shared the measures taken against heavy rains and floods in 6 provinces in the Western Black Sea Region, where “red” warnings were given. Citizens in the region were asked to be careful and precautionary

ANKARA (IGFA) – According to the written statement made by the Disaster and Emergency Administration (AFAD), it has been reported that the locally strong downpours in the Western Black Sea will increase their effect and will be very strong and severe in places throughout the Western Black Sea until midnight today. .

In the statement made by AFAD regarding the precautions, the information received from the General Directorate of Meteorology was also shared. 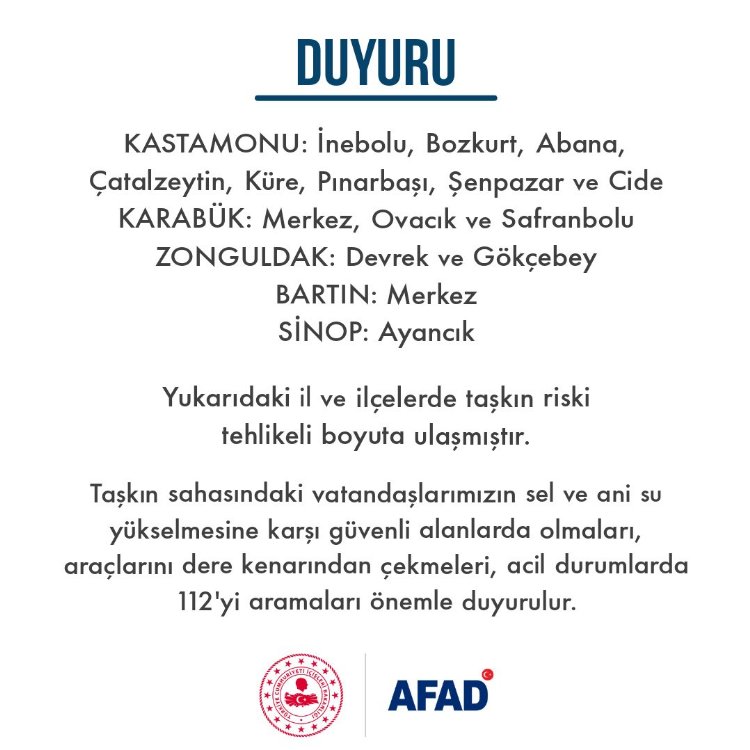 A total of 10 workers, 4 vehicles and 1 tracked rescue vehicle were assigned by AFAD from Ankara, Bursa and Eskişehir provinces with the aim of providing reinforcements against adverse situations that may occur. As a result of the rains experienced, 4 buildings in the center of the province, 1 residence in the central Epçiler village and 1 residence in the Dizlermezeci village of Kurucaşile district were evacuated. Mehmet Rıfat Efendi KYK dormitory with a bed capacity of 1,181 has been allocated to be used in case of need. the road was closed to traffic due to the landslide on the Hasankadı road; 3 bridges were closed to transportation due to damage to their fillings.

A total of 10 search and rescue workers, 2 vehicles and 1 boat from Istanbul and Afyonkarahisar were assigned for precautionary purposes. 34 people in 7 residences were evacuated from their places of residence.

In the city center and in the districts, there have been blockages and landslides in the culverts due to precipitation and interventions are made with local possibilities. At the junction of Yenice district İsmetpaşa, Aşağıköy, a report of closure as a result of a landslide was reported, and construction equipment was dispatched to the incident area.

A total of 11 workers and 3 vehicles were assigned by AFAD from the provinces of Aksaray, Balıkesir, Bursa, Samsun and Tokat with the aim of providing reinforcements against adverse situations that may occur.

It is connected to the Ayancik district; Citizens living in slightly damaged houses and containers in Zaviye, Mestan, Pazarcık, Çamyayla and Babaçay villages were evacuated for precautionary reasons. The village headmen of the Yazıcı and Hamamlı villages of Türkeli were consulted and warned to evacuate the less damaged houses. 38 containers in the discontinuous accommodation center in the Babaçay region were evacuated. KYK dormitory for 200 people has been allocated to be used in case of need.

The Gaziler Stream in Gökçebey district overflowed as a result of heavy rain, and 25 houses on the side of the creek were flooded. Our 56 citizens living in residences were placed in social facilities. A total of 10 search and rescue workers and a vehicle from Samsun and Sakarya were assigned as a precautionary measure. Dinner was distributed to 150 citizens who were evacuated by the Red Crescent.

In the middle, 1 helicopter from the General Directorate of Security was assigned to Sinop province, 1 helicopter from the Coastal Security Command to Bartın, Amasra, and 20 excavators, 5 dozers and 15 trucks assigned by the General Directorate of State Hydraulic Works (DSI ) were dispatched with 6 red warnings. A vehicle is kept ready in the provinces of Bolu and Giresun to be assigned to the regions that have been given a red warning by the Turkish Scouting Federation (TİFAKE).

There are a total of 2,552 workers and 826 vehicles/equipment deployed in the provinces of Kastamonu, Sinop, Bartın, Karabük, Zonguldak and Düzce, where a red warning has been issued and kept on alert.